November 7th, 2010. 6.30 a.m. Clear, calm and cold. Just above freezing, I’d say. There’s no frost on the ground or the grass, but a fine white film slicks  the tops of the wooden fence posts. I step out, and for the first time this year I don’t know which way to turn. I’ve taken every possible combination of routes, many times over. It’s a fine morning for a walk alright, but my heart’s not in it and my feet are heavy. I head towards the light, in the south-eastern quarter. It being a Sunday, the road is mine. Jackdaws and rooks are about. The cattle up on the airfield are lowing, the sound carrying loud in the morning, yet I can barely hear the traffic on the A14 away to the west, the usual unrelenting, rumbling undertone of these parts. There’s no perceptible breeze so it’s not that at all. In Kashmir a measure of distance is the call of a cow. Hmmm. The brook is carrying a good amount of water, clear, flowing slowly but steadily into the ocean 30 or 50 or 100 cow-calls’ away. I kick through fallen leaves. An old willow has been stripped to the bones of its branches, and most trees are now looking thinner, showing more sky…their fat has returned to the earth…except for the ash and the oak, still fully-leaved and clothed in green. As I pass beneath trees, I wake woodpigeons. The hollow whoomp-whoomp of their quills as they launch into flight fills the morning. Out in the fields they are beginning to gather into their large winter flocks. The grass is soaked and my feet soon feel the wet. A lone jogger, on the other side of a field-hedge, trundles by, breathing hard. I walk up the muddy edge of a field, sown with winter wheat perhaps, a million single green blades breaking through the brown weight of earth. Lone black rooks sit solemn and still. In the distance, mist blurs the trees on the skyline. A country of clouds in the low southern sky hides the sun but above them is bright silver-blue. I check out the woodpecker copse, the clear-running ditch from Histon, the kestrel windbreak behind Westwick House, the cherry-plum thicket, but only blackbirds scold and tut at my presence. Back on the village road, a bread-delivery truck rushes past. A single black squirrel, or very dark brown, skips across the guided-busway. More common in the village just to the south, in Girton, I’ve rarely seen these melanistic mobsters in these parts, though last year one came into my garden. Come to think of it though, I’ve seen only a handful of greys in my whole patch this year. I’ve seen more muntjacs than squirrels. Approaching home I hear the once familiar, once even irritating, persistent chirping of house sparrows. There they are again, those drab and recently despised gutter-snipes and eaves-droppers. Only a handful still have a precarious foothold on the nation’s fascias. Once not worth a look, I now stop and stare.

6th April, 2010. It’s dry, and not especially warm, with the sun veiled behind thin cloud and a steady breeze blowing out of the south-west. Still, it’s a fine evening to be out. I head for unexplored ground at the southern edge of my territory, a 6 mile round trip. I cut through the rec and the planted copse onto the guided busway. Spent catkins from the poplars that line the brook are strewn over the ground like purple fire-crackers. An enormous field of rape has seemingly sprung up overnight, so fast is its growth at this time of year. It has already formed tight green florets, like mini-calabrese, which taste good, I find, even raw. It won’t be long before this part of the parish, like large swathes of England, turns bright yellow, inducing allergies, hay fever and asthma among some unfortunates living nearby. Most of it will end up as cheap blended vegetable oil on the bottom shelf in the supermarkets, but cold-pressed rapeseed oil, if you can get it, is as nutritious and tasty as olive oil – without the air-miles.

I walk up the track of the still idle guided busway, and further on, past the built edge of Histon. An ungainly dog-like animal the size of a spaniel lopes across the pasture about 200 yards away. It is a muntjac deer, its white undertail flashing with each bound. It disappears into the hedgerow at the far end of the field. A few minutes later it is followed by another, but this one is sauntering. It trots, then walks, with head down, rump up, wandering here and there, in no hurry. It hangs around at the edge of the field with the rabbits and pheasants. I hear a short bark, and then another, so dog-like I’m sure it’s not muntjac … but then again they are also called barking deer so it might be them. They are not often abroad in the daylight.

A green woodpecker is on the ground in a paddock. It’s looking up into the sky, quizzically, as if waiting for an answer. It continues thus for five minutes or more. For the first time I get a really good look at this omnipresent but elusive bird with the maniacal laugh. Its back is pure olive green, its crown crimson, and its face black, which gives it a fierce demeanor. But the most noticeable thing is its long, black sword of a beak… it is, after all, a woodpecker. Only when it loops away in flight is its bright yellow-green rump conspicuous. Along the way, a greenfinch wheezes, while a chiffchaff endlessly repeats its squeaky-wheelbarrow song, perhaps the most irritating in bird-dom. A pair of courting collared doves mew hoarsely before alighting on top of a telephone pole.

I head across fields to the village of Girton along signposted paths. This is dog country, and they are out in force today, followed by attendants desperately trying to assert some control as they climb all over me (the dogs). I should know better. I vow to avoid all designated footpaths leading out of villages – they are invariably fouled. I walk through lower Girton and down tree-lined Washpit Lane, which leads along a tiny brook, presumably at one time ponded to provide a dip for village sheep. I am approaching the A14 at its juncture with the M11 and the roar has been gathering. Suddenly I am on the highway, in the thick of it, and forced to walk on the footpath facing three lanes of hurtling oncoming traffic. The air is sour with overheated rubber. Two of Eddie Stobbart’s juggernauts, ‘the future of multimodal logistics’, blow my beanie clean off my head  in quick succession. The deep ditch and shelter belt beside the road is awash with litter – bits of vehicles, gaping tyres, plastic sheeting, bottles, truckers’ jetsam. It really is a most unpleasant place, and I cannot escape.

A little further on, however, Beck Brook, that runs north-east like a silver thread through the whole of my patch, from one end to the other, and which is here a mere slip of water, emerges from underneath the carriageway and there is a break in the fencing. I clamber down the bank and away from the maelstrom. I follow the rill, and every step brings relief. Here, upstream, the brook is not so deeply set in its banks; it is more meandering, and shallower of course – a natural stream at last, though tiny. 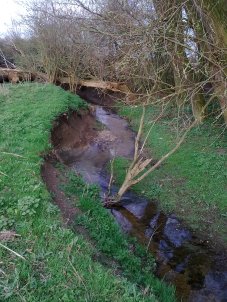 A black squirrel bolts for the safety of a tall waterside tree and corkscrews up it as I move round to get a better look. At about thirty feet it dives into a hole, then pops its head out to see what I’m up to. Its eyes bulge blue from its pure black face. I’ve seen black squirrels bound across the main street in Girton in previous years, and a friend reports seeing them in Cottenham, a neighbouring village, but I’ve not seen them in the countryside before. They are mutants and localized, favoured, apparently, by lady grey squirrels, and thus spreading rapidly though the eastern counties.

I make my way homeward across big open prairie fields, mostly down to winter wheat. The sun is low on the horizon, still hazy. A buzzard launches off from an isolated tree – even at 300 yards I am too close for comfort. It flies with slow, laboured wingbeats as if they are waterlogged, and lets out one plaintive, wilding cry. It is well within range of previous sightings, so is probably one I have already encountered. Over the next field it is mobbed by a lapwing, which flies up fast to meet it, much smaller of course, but also more agile. The buzzard moves on. I find the lapwing, and its mate, in the middle of an open fallow field, thinly stubbled violet-grey from some previous crop. They are probably nesting, given the fierce territorial attack on the buzzard. This is one of the few yet unploughed fields in the neighbourhood, and I fear the farmer will soon get round to it, burying the scrape and its eggs beneath a weight of cold sod. It is indeed a most precarious existence.