25th April, 2010. Sunday. Some days bring no special favours or encounters. I leave the house at 5.30 a.m. and make my way north along the guided-busway, then cut across a field and follow the brook to the village of Rampton. Coming back I retrace my steps, more or less. The sky is cast over and stays like that, for the first time in weeks. No sun then, though it is exceptionally mild. In the distance a light mist carpets the land. The dawn chorus lingers, but I hear (and see) only the usual denizens. Not to dismiss them at all, these commonplace creatures, but to list them again and again would be tedious. I must, though, mention the jenny wren (or kitty wren in Clare’s vernacular speech), usually the shyest and most retiring of birds, sitting on top of a gate-post in full view of the world, singing its heart out – a high, thin trickle of notes that barely carries across the lane – its chest puffed out like an opera singer’s, trembling with each weedy, defiant outburst. 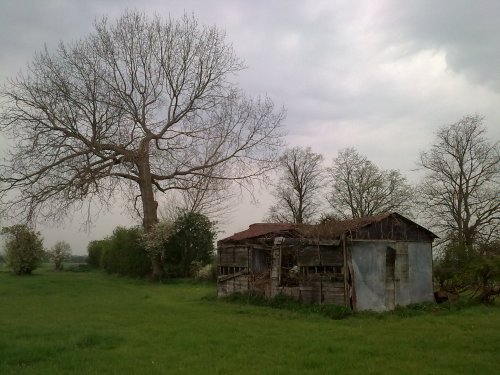 The early light reveals a network of well-used animal runs or paths, not so conspicuous in the full light of day or in bright sunshine. They lead through fields, up and down banks, and across watercourses, worn by the feet of wild creatures themselves, according to their own mysterious ways. Claw marks in the mud suggest badgers but I’ve not seen any hereabouts, nor found a sett. They are no doubt used also by foxes, muntjac, hedgehogs, stoats, rabbits and rats, at one time or another. But who first blazed the trail, and what rules of the road apply here? Are those using them immune from predation, protected by some sort of code? One thing is certain – they get wet when crossing the brook.

Birch, whitebeam, sycamore, field maple, plane and some species of willow are all fleshing green, whilst individual ash trees are just breaking leaf and others are not. On the banks of the guided-busway the nodding, pale yellow cowslip is in flower (Clare’s cowslap or paigle), believed to be the favourite flower of nightingales which are supposed to only frequent places where cowslips grow (though I saw none today, nor ever have), as is garlic mustard or jack-by-the-hedge – both of which are edible and medicinal plants. In this year of discovering or, better, uncovering the place where I live, I think I must eat from it too – foliage, fruits, roots, flesh – to taste of its minerals and treat from its storehouse of medicines, so now I must learn how to forage, with due care and respect.

Now is a good time to reflect on this quest. With 34 forays so far, and about a third of the way through the year, I am bang on target to achieve the estimated 100 walks round my patch by 2011. Already I have traversed most of the ground within two miles of my house, a territory of some 12½ square miles. True, there remain a few unpromising tracts that I still need to tread, and there are some definite no-go areas, despite my best efforts – one or two especially intimidating farms, the Immigration Detention Centre in the grounds of the old Oakington barracks, the disused airfield earmarked for a new town, fenced and patrolled (parts of which I have, nevertheless, cased from a distance, and slipped into on occasion), and, of course, several hundred private gardens in the four villages that lie within my domain. But I now know the terrain, the lie of the land, at least. However, sauntering through it is only a start. I need to go deeper. To know it more fully I should sit still in one place for some time, pray in it, and sleep in it too, take night walks and bivouac out in the open. To experience a place only in daytime is to know only half of it. I began by running through this landscape (a little), then I walked it, and now I must sit in it, and lie down in it too.

On coming back into the village, I meet the Old Laughing Lady again, not seen since the cold days of winter, laughing still I’m glad to say. She finds the idea of bird-watching hilarious. And then, for the first time in weeks, it rains.